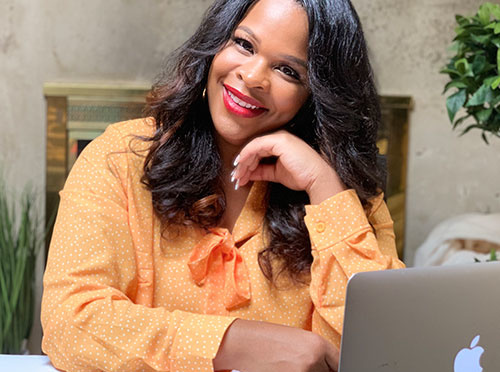 Monique Jackson’s experience in all the aforementioned areas including creative advertising and brand marketing made her the powerhouse in the field she is today. Jackson’s own brand evolved from Creative Advertising and Brand Marketing at Universal Pictures in 1996 to Public Relations, Marketing and Promotions professional at Island Def Jam, later utilizing on to television show creator and producer (VH 1’s The T.O. Show) and business partner in Team Image PR, a company she formed with colleague and friend Kita Williams while they both worked at Island Def Jam.

When asked what prepared Monique Jackson for her career as an entertainment executive she answered “LIFE! I’ve always been a person of service. I love helping people accomplish their goals. I believe, I was put in this world to make people smile and feel better.”  With childhood dreams of becoming a minister, a nurse and an entertainer, the wife and mother of five has managed to fulfill all three vocations.

Monique enjoyed a successful tenure at one of the most prestigious record labels in the industry, Island Def Jam Music Group. Jackson quickly earned the respect of the artists and her peers with a take-charge attitude and a consistent can-do/will-do spirit. Jackson’s confidence and hard work ethic did not go unnoticed by music industry luminary, Kevin Liles. “She was brilliant, she was confident but not cocky, she was a hard worker, 110% committed to the project. I knew she was a superstar and I needed her on my team,”, Liles said. Known to be a type “A” personality who not only likes it done right, but “right now”; Monique also became known to many as “Momma Mo” for her ability to nurture and encourage artists to be and give their best. Her balance of tough love, vision and support helped to shape some of Def Jam’s biggest stars including Jay Z, JaRule, AShanti, Musiq, Ludacris and Neyo before leaving the label in 2005 to start TEAM Image, a PR/ Marketing firm.  Monique’s balance of empathy, sensitivity and professionalism maintain the house that Team Image PR has built.

In 2011 Monique created workshops for the United Negro College Fund’s ‘Empower Me’ Tour traveling across America for 3 years, hosting panels and seminars with her celebrity friends. “Speaking to young adults about education, peer pressure, self-esteem, how to realize and obtain their dreams & goals in life is what’s really important to me.” Monique continued, “Maya Angelou once said When you learn, teach. I believe we are all students in this class called life and it is an honor to share some of my life lessons with people.”

Today Monique is running 2 companies , Monique’s Dreams – a production company where she creates and executive produces quality programming that feeds the soul, entertains the masses and educates the mind. She holds the creator, EP and talent on VH1’s TO Show . She has consulted on a number of other projects both reality and scripted and just recently created, produced and sold BET their first digital reality hit  show WIG OUT.

Monique Jackson was born in Los Angeles, Ca and is the eldest of 5 children. She is a wife and mother of 5 boys and enjoys traveling, creating businesses, and spending time with family and friends.